The anti-passback feature is designed to prevent misuse of the access control system.

be used in order for the system to grant access.

The anti-pass back feature is most commonly used at parking gates, where there is both

again. For the typical user of the parking lot, it works on well, because the user would normally

swipe their card at the “in” reader to get into the lot in the morning, and swipe it at the “out” reader

to get out of the lot in the evening.  However, if a user swipes his card at the “in” reader to get in, and then passes his card back

to a friend, the card would not work the second time when it was swiped by the friend. The attempt to use

the card a second time would create an “in – in” sequence that is a violation of the anti-passback rules,

Anti-passback can also be used at employee entrance doors. This requires that a card reader be installed

on both the inside and the outside of the door. Employees are required to both "card-in" when they enter the

building and "card-out" when they leave the building. The anti-passback feature is also commonly used with turnstiles.

an additional set of rules for card readers inside of the building itself. Basically, this rule says that unless a

card is first used at an “in” reader at the building exterior, it cannot be used at any reader within the interior

of the building. The theory is that, if a person did not enter through an approved building entrance, he or she

should not be permitted to use any of the readers within the building.

Depending on the access control system manufacturer, there may be additional anti-passback features in

the system. Some of these features could include "timed anti-passback", which requires that a designated

amount time pass before an access card can be used at the same reader again, and "nested anti-passback"

which requires that readers be used in only designated sequence to enter or leave a highly-secured area.

Denying access when a user attempts to use a card out of sequence is sometimes called "hard" anti-passback.

Some access control systems also offer a feature known as "soft" anti-passback. When a system is using this option,

users who violate anti-passback rules are permitted access, but the incident is reported to the person managing the

card should be used in the proper sequence in the future.

The anti-passback feature can also be integrated with the corporate computer system, preventing users from logging on to

the network at their desktop computer unless they have properly entered the building using their access card. This feature

user is at work, there is no reason for someone from off-site to be logging on to the network using his or her user name

and password. When the user leaves the building at the end of the day, his or her remote log-on privileges are turned back on.

3.  Enable the anti-passback function on the T60. 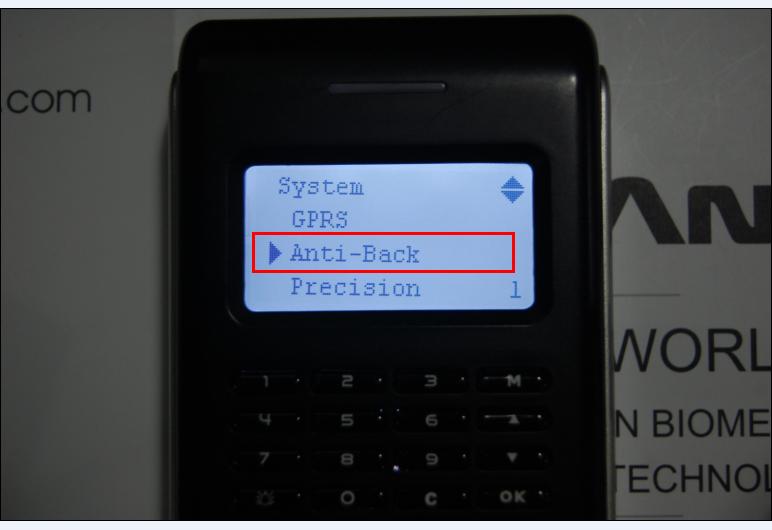 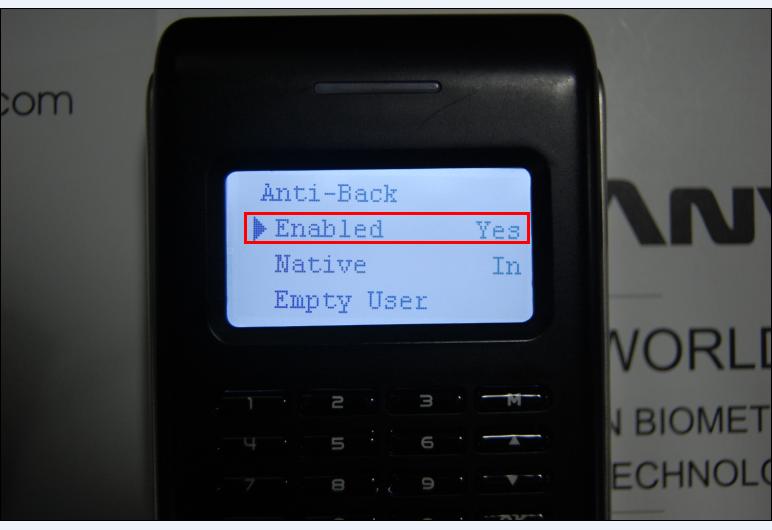 Native   In , when you select In, means that the device be installed at outside, the device is entry door.

Out, when you select Out, means that the device be installed at inside, the device is exit door.

PS: In general, T60 is installed at outside , as a entry door, normally will select in status.

Empty User: when you identification pass on the device, means that there is one user have already entry

into the door, so in that case , you will see have one number on the top right corner of the LCD.

Empty User function, if one guy entry door, then tail with other guys exit door, in next entry into the door,

If you identification pass on the T5s, then the number will minus one.